The St. Louis Mullen Foundation: Fostering a Deep Commitment to the Community

An active connection to our community lives at the heart of The Biome. Key to this connection is the long-term impact volunteers have played in the development and growth of The Biome. Ron Zalonis, a long-time volunteer to Youth Learning Center (YLC) and The Biome, clearly reflected a deep and heartfelt connection to his community. 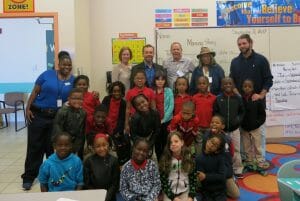 Ron, a transplant to St. Louis from San Francisco, quickly found a home within the Central West End community. He was known by most as the go to expert for computer and IT help. Not only was his reputation recognized by his expertise, but also by his overwhelming generosity. Ron would not only fix everyone in the neighborhood’s computer, but he would always do it for free, refusing any kind of payment. For years, Ron volunteered at YLC, helping to set up and fix computers. In YLC’s last year of operating an after school program, Ron donated over 2 weeks of time helping to fix a dozen laptops that had been donated to the organization. Ron was proud to spend the time updating the hardware and installing software so that the departing students would have a computer to take with them to middle and high school. When YLC tried to pay Ron, he simply ripped up the check and said, “No, no this was for this kids.”

This past summer, Ron Zalonis passed away in his home in the Central West End. Without any close family or relatives, Ron’s many friends were left not knowing what to do. Many wanted to contribute to Ron’s funeral; however, a decision was made based on what they believed Ron would have wanted, his body was to be donated to science and donations would be collected for a charity that represented Ron’s passions and generosity. Together, the CWE neighborhood came together to host a celebration of his life on Sunday, August 27th at Rosie’s Place where over $6,720 was raised for what would formally become the Ron Zalonis Technology Grant organized by the St. Louis Mike Mullen Foundation. The Biome was proud to receive this gift on September 8, 2017. The gift will go toward fulfilling both The Biome’s and Ron’s mission of helping students to become builders of the future.

About The St. Louis Mullen Foundation

The St. Louis Mullen Foundation is a 501(c)(3) nonprofit that hosts the annual Mike Mullen Days. In 1999, a proclamation by St. Louis Mayor Clarence Harmon declared May 2 as Mike Mullen Day in recognition of Mike Mullen, an impactful community activist in the Central West End neighborhood. Years later, a group of his friends honored the day with a surprise party. The celebration turned into an annual tradition to raise money for Mullen’s selection of charities. Next summer will mark the 8th Annual Mike Mullen Day. The Biome is proud to be the first charity selected for the upcoming Mike Mullen Day.